The first chapter in a sassy sci-fi series co-written and co-drawn by Simon Roy and Damon Gentry, now available in a handsome print edition.

The next chapter will be serialized monthly on Simon’s Patreon, which you can join for just $3 a month!

I’m collaborating with Simon Roy on a sci-fi comic currently being serialized on his Patreon. His Patreon is full of great comics; subscribe. The soundtrack single from the comic book VINEGAR TEETH!

Now considered a somewhat obscure golden oldie, “Share That Nice Daydream” was the only hit for pastoral pop-folk recording artist Colorado Jonesy. It fell off the pop charts the week after its #59 debut. A decade later, the song was resurrected to prominence in a series of successful television advertisements for “Dream Whiff” brand deodorant, then quickly forgotten once again. Colorado Jonesy released highly un-acclaimed folk albums–obsessively praising Mother Nature–every year until his death in 1987. He died doing what he loved, hi-speed stunt speedboat racing with no regard for safety regulations.

Vinegar Teeth is a new series from Troy Nixey & Damon Gentry. Issue #2 is out this week, Feb. 21! Details: https://www.darkhorse.com/Comics/29-885/Vinegar-Teeth-2 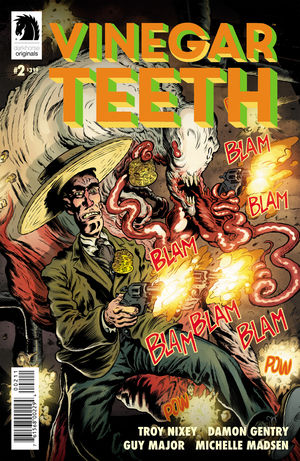 “A new release from Dark Horse Comics will poke fun at genre motifs.  Vinegar Teeth is a four-issue miniseries from Damon Gentry (Sabertooth Swordsman) and Troy Nixey (Jenny Finn, The Black Sinister, Trout). The first issue is due in stores on January 24.

The mash-up of genre fiction pairs short-tempered, alcoholic supercop Artie Buckle with Vinegar Teeth, a hideous Lovecraftian monster who has a heart of gold, on a mission to rescue besieged Brick City.” – Betsy Gomez for ICV2

After a successful sold out first printing, Dark Horse Comics is collecting a new edition of the over-the-top-madcap-fantasy-adventure-comedy, Sabertooth Swordsman and The Mayhem of The Malevolent Mastodon Mathematician! (Winner of the 2014 Russ Manning Promising Newcomer Award for Aaron Conley’s intensely intricate artwork!)

“There’s awesome and then whatever level is above that… that’s where SABERTOOTH SWORDSMAN lives. Such a fun comic.” — Skottie Young (I Hate Fairyland)

Aaron and I spent several years pitching and forging and crying blood tears and co-creating our debut black & white graphic novel and we’re very proud of the positive feedback it’s received, and hopefully it’ll reach an even larger audience with this new edition featuring 32 new color pages of short stories and art, in preparation for the ambitious sequel we’re working on!

“Sabertooth Swordsman is the most exciting graphic novel I’ve seen in a long loooong time. An absolute masterpiece that is thrillingly original and alive with kinetic energy! Damon and Aaron should be instant superstars!”— Mike Allred (Madman)

Click here for an 11 page preview on Comics Alliance.

MORE PRAISE BECAUSE WHY NOT

“One of the coolest hauls from ECCC is a book called SABERTOOTH SWORDSMAN from Dark Horse. The art by Aaron Conley is insane. Love this stuff.” – Ryan Ottley (Invincible)

“A meeting of two creative sensibilities that brings to mind the classic Miller/Darrow combo, but with a freewheelin’ psychedelic kung-fu kink.” — Jamie S. Rich (LadyKiller)

“Sabertooth Swordsman is the greatest work of human expression AT LEAST in the last 10,000 years, including all holy texts.” – Buster Moody (Task Force Rad Squad)

“I’m really excited about the work Damon and Aaron are doing. Sabertooth Swordsman is fantastic comics. It’s the kind of work I hope to find when I go into a comic shop.”—Brandon Graham (Prophet)

“Every now and then a comic knocks you on your ASS. Sabertooth Swordsman did just that…ASTOUNDING. ASTOUNDING.” – Jason Wood (11 O’Clock Comics Podcast) Issue #5 of the Eerie horror anthology came out this week, it’s got a 10 page story by John Arcudi and Aaron Conley, and “Monster Gallery” pinup by me!